McCarthy, 66, is now president and CEO of the Natural Resources Defense Council and a professor at the T.H. Chan School of Public Health at Harvard University. She served as EPA head between July 2013-Jan. 2017.

During her time at EPA McCarthy led the Obama administration’s efforts to further regulate greenhouse gas emissions from both mobile and stationary sources. In Aug. 2015 the agency finalized a rule aimed at reducing atmosphere-warming gases from electric power plants. Enforcement of the so-called Clean Power Plan was stayed by the U.S. Supreme Court in Feb. 2016 and the regulation was then replaced by the Trump administration with a weaker version.

McCarthy also helped to negotiate both the 2015 Paris Agreement and the 2016 Kigali Agreement to phase out production and use of hydrofluorocarbons.

She will hold the the formal title of director of the White House Office of Domestic Climate Policy. That role will compliment former U.S. Sen. and secretary of state John Kerry’s work as special presidential envoy for climate.

The Post story also said that Ali Zaidi, an aide to New York Gov. Andrew Cuomo responsible for climate and energy policy and a former associate director for natural resources, energy and science at the White House Office of Management and Budget, will be McCarthy’s deputy.

As is customary at the end of a President’s tenure, Barack Obama issued several executive orders and memoranda late last week that clarify the succession of leadership at federal agencies. Included were directives affecting the Council on Environmental Quality, Office of Science and Technology Policy, and Environmental Protection Agency.

The question of EPA’s leadership succession was the only one of the three to be addressed via executive order. Obama set out sixteen potential chief managers of the agency in the event the administrator or deputy administrator dies or resigns.

Gina McCarthy has been the 13th administrator of EPA since July 2013. Image courtesy Wikimedia.

While current administrator Gina McCarthy and acting deputy administrator Stan Meiburg have not said that they will leave office before noon on Friday – the time and date on which Obama’s administration ends – their successors may not be confirmed by the Senate before then.

EPA has not had a permanent deputy administrator since August 2014, when two-decade agency veteran Bob Perciasepe resigned to lead an environmental advocacy organization.

Once McCarthy leaves office on Friday, and if Meiburg also exits, then the succession at EPA will progress through the agency’s general counsel and then the assistant administrators for the Offices of Solid Waste, Chemical Safety and Pollution Prevention, Air and Radiation, Water, and Enforcement and Compliance Assurance. 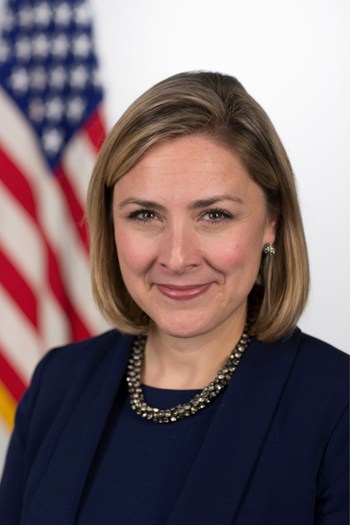 The Council on Environmental Quality, which is part of the Executive Office of the President, has not had a chairperson in place since Michael Boots resigned in March 2015.

Obama’s memoranda of Jan. 13 provides that the organization’s managing director, chief of staff, general counsel, associate director for National Environmental Policy Act, and, finally, other associate directors in order of appointment will succeed to its leadership.

Current managing director Christy Goldfuss has been leading CEQ since Boots left the White House staff. She is a former deputy director of the National Park Service and once worked as a staff member for the House Committee on Natural Resources.

The CEQ chair is subject to Senate confirmation.

Obama also ordered Friday that the associate directors for national security and international affairs, technology, science, and environment and energy will succeed, in that order, current OSTP director John P. Holdren if a new director is not in place by noon on Jan. 20.

If the associate directors are no longer in office at that time, then OSTP’s chief of staff, deputy chief of staff and assistant director, and general counsel would be next in line.

Like CEQ, OSTP is part of the White House staff. Its director is also subject to Senate confirmation.

Trump has not named the next OSTP director.